If you played a lot of games in the PlayStation 2 era, it is quite likely you’ve seen the logo for the RenderWare Platform numerous times. After all, the RenderWare game engine powered some of the biggest titles of that generation. Some of the best-known games running on RenderWare include Persona 3 and 4, Tony Hawk’s Pro Skater 3 and 4 as well as Tony Hawk’s Underground, the 3D Mortal Kombat games, and of course Grand Theft Auto III and its sequels.

I am not an expert on game engines so I will not even attempt to explain the finer details of RenderWare, but suffice to say it offered a powerful and versatile middleware solution for game developers at an affordable price point. Despite being most widely used in the sixth generation of game consoles, RenderWare’s roots actually reach all the way back to 1993.

RenderWare was built in-house by a UK-based tech development studio named Criterion Software, also formed in 1993. In order to develop software to showcase their new engine, Criterion started a gaming division that same year. This division, aptly named Criterion Games, created solid but ultimately forgettable titles such as Redline Racer, TrickStyle and AirBlade in the late 90s and early 2000s. In 2001, around the time AirBlade was being worked on, a driving game tentatively titled “Driving Hero” and later known as “Secret Driving Game” and “Shiny Red Car” was also under development.

The pitch for “Driving Hero” was reportedly something along the lines of “How do you drive when you have a rental car?” Apparently, my answer of “Sensibly, as I’d quite prefer not to get killed” is not the correct one (remind me not to get in a car with Criterion co-founder and presenter of the aforementioned pitch, Fiona Sperry), as this game was going to be all about reckless driving at high speeds. Later in 2001, the project found a publisher in Acclaim and received the name it would release under in November of that year. “Shiny Red Car” officially became Burnout.

Looking at the finished game, it is quite obvious that Burnout was meant to be primarily a showcase for the latest version of RenderWare, not the start of a multi-million dollar franchise. The presentation is basic even by the standards of the era, and despite the gameplay focusing on driving like a maniac there is very little flash to be seen here. The handful of fictional cars on offer are as generic-looking as they come, with equally generic names (Compact, Sports Coupé, Muscle, etc.) for each, and there are five different courses (plus reverse versions and marathon stages that combine multiple of them together) based on real locations in Europe and America. The soundtrack consists of synth pop that hardly excites anyone playing the game, but doesn’t exactly offend either.

Fortunately, once you hit the road, the racing itself more than makes up for the less than spectacular presentation. As stated earlier, the idea here is to drive like a crazy person by drifting, driving close to traffic without crashing, and driving on the oncoming lane. The more you do these things, the more boost you earn for your boost bar. Once the bar is filled, you can activate your boost, and if you manage to empty the entire boost bar you earn a Burnout, which instantly gives you 50% boost back. The controls, while not yet as tight as they would become in later games in the series, are excellent, there is a nice sense of speed, and weaving through traffic is already an intense experience while the crashes are suitably violent.

The level of damage and destruction we’d see in the later games is not here yet, and the crash physics seem like they’re trying to be realistic instead of over-the-top – the cars have more weight here, so most of your crashes will look relatively mundane by Burnout standards. In a way, that actually makes the huge wrecks seem more spectacular. The crashes are what this series is primarily known for and were already a major selling point for the first game, and Burnout even lets you save your best crash replays. Takedowns don’t officially exist yet so you’re not going to be wrecking opponents left and right, although you can at least push them into obstacles or traffic if you time it right. There’s no reward for doing so, except of course the fact you don’t have to worry about that particular opponent for a while.

Going racing, we also get to see exactly what the RenderWare engine is capable of. The courses in Burnout are based in and around cities, and while you’re not able to explore beyond the borders of the race track you still end up driving through large urban environments with massive draw distances and not even a hint of pop-up. Better yet, all of this runs at a rock-solid 60 frames per second, no matter what is happening onscreen.

Getting to such a high level of performance was clearly problematic on the original 2001 PlayStation 2 release, because it’s very much not a pretty game and almost looks more like a PSone title with the severe aliasing (which, now that I think of it, may in fact not be aliasing at all, but combing artifacts from low-resolution field rendering like we saw on many other early PS2 games) on display. The Xbox and GameCube ports were released the following year, and retain the excellent performance while looking vastly more attractive especially on Microsoft’s console. All screenshots in this article are taken from the Xbox version running on the Xbox 360, which upscales the resolution but introduces frame drops and various glitches at least on the PAL release. 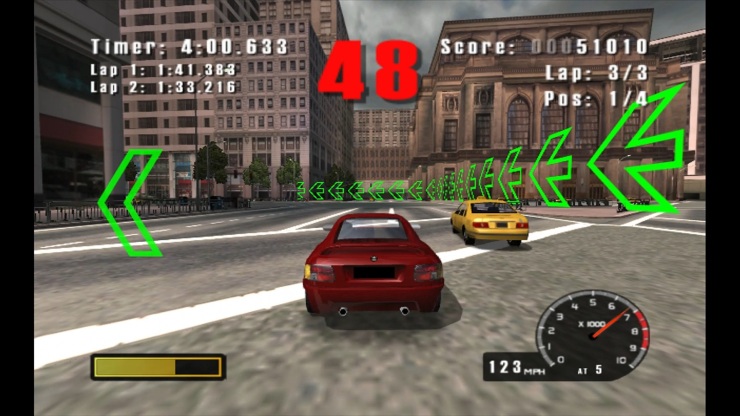 The career mode progression in Burnout isn’t much to write home about. You win increasingly difficult championships and earn faster cars via face-off events, and repeat until you’ve won everything and unlocked all the vehicles, and that’s all there is to it. Still, completing the game may take a while, because these championships and face-off races get punishingly difficult very quickly. Not only are the courses extremely long, with a three-lap race often taking the better part of eight minutes, but you also have a limited number of continues much like F-Zero or Super Mario Kart. Add a bit of rubberband AI into the mix and you have an extremely challenging arcade racer.

Along with the single player career, Burnout features the usual assortment of single races and time attack events, as well as a split-screen two player mode. Online multiplayer is not here yet, because Xbox Live and the PS2 ethernet adapter wouldn’t debut until a couple of years later.

Burnout earned a generally positive response from players and critics. While its nature as basically a RenderWare tech demo was apparent, people enjoyed the intense racing and the crashes, and Acclaim greenlit a sequel for a late 2002 release. These days, returning to the original Burnout is still an enjoyable experience even though the sequels are generally better games in every way. So much of what makes the Burnout series what it is was already there in 2001, and with the groundwork well and truly laid Criterion was able to focus on creating a more fleshed-out racing game with more personality and spectacle.

Nowadays, Burnout can be found in second-hand shops or online for basically nothing, so if you find a copy and own a system that can play it, there’s no reason not to give it a whirl. (Also, if for some reason you want to see me play Burnout and talk about it, I’ve got just the video for you right here) 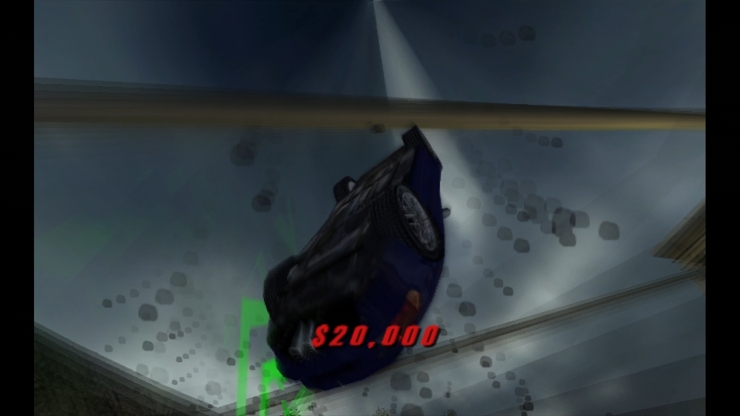