I could stop this article right here because that’s really all that needs to be said about the almighty Metal Slug, but I’m not paid for brevity. Actually, I’m not paid at all because this is my site and I’m writing these things for fun, but that’s beside the point. Uh. Where was I? Ah yes, Metal Slug. Everyone’s favorite non-fighting (and non-Windjammers) game series on SNK’s Neo Geo system. 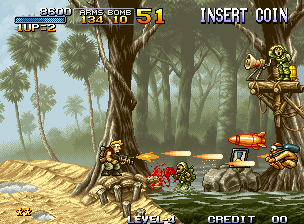 If you went to an arcade in the late 1990s and early 2000s, there’s a good chance you’ve played one of the games in the Metal Slug series, or at least saw someone else play them. Even if you didn’t, you may have come across one of the many home ports or discovered the games through emulation. SNK’s run-and-gun series is nothing short of classic, and the intense gameplay and co-op action combined with the cartoony animation has proven so popular among gamers that the formula has stayed almost completely intact throughout the years. Metal Slug games are still being re-released on every system imaginable, and the latest new game (Metal Slug 7 for the Nintendo DS) came out in 2008. Unfortunately, as the original developers at Nazca Corporation haven’t worked on the series since Metal Slug 3, the quality of the later releases has generally not matched the original classics, but Metal Slug is still Metal Slug.

The first Metal Slug (or Super Vehicle-001: Metal Slug, as the title screen reads) was released in 1996 for the Neo Geo MVS arcade system and its home counterpart, the AES. The story is almost non-existent: in 2028, the evil General Morden is being a jerk, and the Peregrine Falcon Strike Force sends their top soldier Marco Rossi (and his buddy Tarma Roving, if you’re playing co-op) to stop Mordin and his Rebel Army from taking over the world. The gameplay is equally simple: you run to the right, shoot/stab/blow up/burn everything that looks at you funny, and rescue prisoners of war who look like hippies with ZZ Top beards. Metal Slug only uses three of the Neo Geo’s four face buttons — one for shooting, one for jumping, and one for grenades. Simple, yet so effective.

Metal Slug shares many similarities with Irem’s fairly obscure run-and-gunner GunForce 2, which was developed by the same team before they left Irem and formed Nazca Corporation. While GunForce 2 does not have the cartoonish charm of the Metal Slug series and has more of a post-apocalyptic vibe to it, the core gameplay is very similar and even UI elements and sound effects are shared between the games. As a result, some fans consider GunForce 2 an unofficial “Metal Slug 0”.

You start Metal Slug with a basic pistol that gets the job done in a pinch, but you’ll want to grab one of the weapon upgrades to increase your chances of survival. The heavy machine gun is just, well, what it says on the tin and is also able to shoot diagonally; the rocket launcher is a bit slower but blows shit up real good; the flame shot immolates enemies (and has fantastic range unlike most flame weapons in games); and the shotgun literally disintegrates enemies. Fairly basic stuff, but extremely satisfying to use. Even just picking them up is great, because you always get to hear the over-the-top announcer voice yell out the name of the weapon in a slightly Engrish-y accent. RAWKET LAWNCHAIR! (yes, I know that particular sample isn’t used until Metal Slug X, but who cares)

Metal Slug is comprised of six stages, with a boss at the end of each one and a couple of minibosses to contend with. All of the characters, stages and bosses look absolutely gorgeous, boasting some of the best sprite work and animation ever seen in video games. Due to the way the Neo Geo hardware handles graphics, everything you see on screen is a sprite. Even the backgrounds, which feature some excellent pixel art. Did I mention this game looks amazing? There is a bit of slowdown when everything is blowing up around you and projectiles are flying every which way, but that just adds to the experience. It’s kind of like the Earth Defense Force series in that respect — when you bring the hardware to its knees, you know you’ve just done something awesome. The music is also excellent, and many of the songs from this game would be remixed for the sequels.

Each level also features the titular Metal Slug, a badass tank that crushes enemy troops beneath its treads and is equipped with a powerful cannon and (limited) missiles. It can also crouch and jump, somehow. Most importantly, the Metal Slug provides extra protection for the player characters, as Marco/Tarma can only take one hit. The game is a bit of a quarter-muncher, especially in the later levels where the action gets so intense that you can barely see the tiny bullets flying at you, but it’s not as mercilessly unfair as some other games in the run-and-gun genre or even some of the other Metal Slug games. Decent twitch gaming skills and pattern memorization are absolutely a must if you want to get to the end without spending a ton of credits, though.

Each credit gives you three lives by default, which can be changed via the arcade machine’s DIP switches or the option menu if you’re playing on console. The AES version and some of the later ports give you five credits to finish the game with, which is doable with some practice and even if you do get a game over, you can start over from the beginning of the stage you died on. The DIP switches also allow you to change the color of the blood, which is nice because the default setting on the American version replaces all the blood with grey sweat. Most of the later ports also let you change the blood color, but this is not possible if you’re playing on an American AES. Well, not by default anyway, as you can install a third party BIOS to easily change regions.

As mentioned, Metal Slug has been ported to a whole bunch of systems including the Neo Geo CD, PlayStation, Saturn, PS2, Wii and PS3. There are even Android and iOS ports with touch controls, which just might be the most insane thing ever. The PlayStation Network version for PS3 is probably the most accessible option, although if you’re completely insane like me you can pay a few hundred bucks for a consolized MVS board (or even a full cabinet if you have the space for it) and buy the original arcade cart for about 50-60 bucks. If you’re even more insane (and filthy rich), you can buy the AES version, which will set you back a four-figure sum — and that is without the console itself. You can also find conversion carts which basically have the guts of an MVS cart in an AES shell and cost a couple hundred bucks. I actually have one of those because when I got my AES last year, I did not plan to buy an MVS anytime soon (welp, that plan didn’t last) and was NOT going to spend a fortune on the official AES cart, yet wanted to play Metal Slug on the AES.

While Metal Slug 2/X and 3 are technically better games than the original and have a lot more of everything, I still consider the first game my favorite Metal Slug title. There’s something about the simplicity of the first game that appeals to me. No fancy sci-fi weapons, no mummy/zombie/alien/bug enemies, no alternate routes or weird levels, only one Slug vehicle, only you and a buddy against Morden and his army. That’s the way I like it. To be fair, I would like to have all the playable characters from Metal Slug 2 because not playing as Fio feels kind of wrong, but other than that this game is basically perfect as far as I’m concerned.